A typical well sized solar thermal system should provide around 50-70% of the domestic hot water requirements of the home, representing a worthwhile saving on hot water heating costs.

The remaining hot water requirement is provided by the boiler.

Contrary to popular belief the amount of solar radiation received in this area is enough for solar water heating to be a viable supplement to existing domestic water heating.

Perhaps surprisingly, the UK in particular receives 65% of the amount of solar radiation that is received by the south of Spain.

The radiation in the UK is made up of direct radiation on sunny days, which accounts for around 40%, and diffused radiation on cloudy days, accounting for 60% of the total.

Summer will provide the largest amount of solar radiation over the year but a useful contribution will also be provided by other seasons.

As an indication, a well sized typical solar water heating installation will provide the following proportion of the household’s domestic hot water requirement:

This translates to over half of the typical annual domestic hot water requirement.

Solar water heating systems use solar panels (sometimes called collectors) to collect heat from the sun which is then used to heat up the water stored in a hot water cylinder.

A boiler is then used to further back up the heat from the water to reach the temperature you want.

Solar panels form part of a system which remains separate from the boiler heating system. 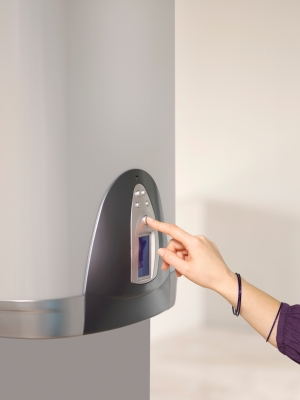